How a foiled terrorist plot led to the 100ml liquid limit at airports ..UK News 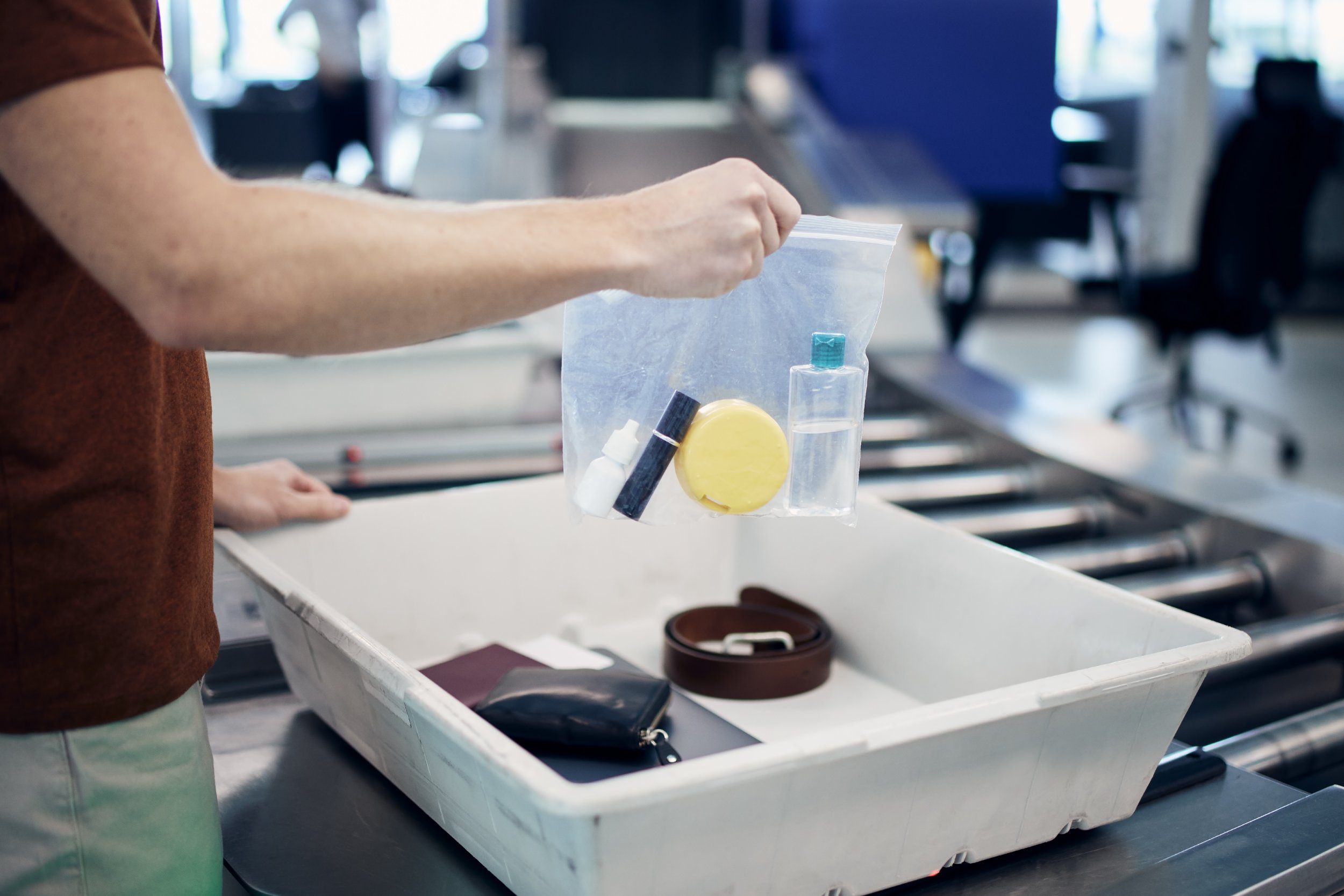 A foiled terrorist plot in 2006 led to a wave of changes in the UK (Picture: Getty Images)

In a matter of years, airports could ditch their ban on liquids over 100ml in hand luggage.

Many of us have been forced to handover shampoo bottles mistakenly packed in the wrong bag or – even worse – expensive alcohol bought as a souvenir.

Currently, liquids must not exceed 100ml and have to be carried in a clear plastic bag.

The move to backtrack on the ban, described as a ‘game-changer’ by airport bosses, will save passengers countless time in queues for security.

According to John Holland-Kaye, the chief executive of Heathrow, the rule could be scrapped nationwide by 2024.

The implementation of new scanning systems will negate the need for strict rules on liquids, he told the Times.

Airports outwith the United Kingdom, such as Shannon Airport in Ireland, have already moved away from the ban.

Liquids in hand luggage currently must be less than 100ml and carried in a clear bag (Picture: Getty)

But why was the 100ml limit introduced?

Before then, there were very few limits on what you could bring onto the plane, and even knives, up to four inches in length, were permitted.

All that changed following the 2006 transatlantic aircraft plot.

Terrorists had been poised to smuggle liquid explosives through security by disguising them as soft drinks.

They planned to carry the explosives aboard airliners travelling from the United Kingdom to the United States and Canada.

The scene of a police raid on Forest Road, Walthamstow, London, in relation to the foiled plot (Picture: : Wikimedia/David Gerard)

Abdulla Ahmed Ali was being watched by police as part of a wider investigation into the plot.

He returned from Pakistan in June 2006 and, when investigators covertly opened his baggage, they found a powdered soft drink—Tang—and a large number of batteries.

In the following weeks the police mounted the UK’s largest surveillance operation, calling on an additional 220 officers from other forces.

Assad Sarwar, from High Wycombe, had met with Ali in an east London park and became a person of interest in the case.

When tailed by officers, he was seen buying items ‘that did not seem consistent with his daily needs’.

MI5 covertly entered the flat being used by Ali and found what appeared to be a bomb factory.

Explosives were to be smuggled through security in soft drink bottles (Picture: Getty Images)

Further investigations – such as secret cameras and microphones – gave proof that devices were being constructed out of drink bottles.

Ali was later watched by surveillance officers at an Internet cafe, where he spent two hours researching flight timetables.

Arrests were made and police carried out raids on a number of properties ahead of a lengthy trial.

On 10 August 2006, British Home Secretary John Reid, broke the news of the foiled plot, along with Douglas Alexander, the Transport Secretary.

Former UK Secretary of State for Transport, Douglas Alexander, informed the public of the thwarted plot to blow up airliners bound for the U.S (Picture: Getty Images)

The same day, Deputy Commissioner of the Metropolitan Police, Paul Stephenson, said that a plot, intended to destroy as many as ten aircraft in mid-flight from the United Kingdom to the United States using explosives brought on board in the suspects’ hand luggage, had been disrupted.

As a result of the incident, unprecedented security measures were initially implemented at airports.

The measures were gradually relaxed during the following weeks, but passengers are still not allowed to carry liquid containers larger than 100 ml onto commercial aircraft in their hand luggage in the UK and most other countries.

The new rules introduced on August 10 2006 resulted in hundreds of cancelled flights, long delays and queues at UK airports.

At the time, Metro reported: ’Politicians, airport operators and airline chiefs had worked through the night to be ready to bring in the new rules, but there was only so much warning that could be given to passengers at one of the busiest times of the year for air travel.

‘At first, no hand luggage was allowed on planes in a move spelled out by the then Transport Secretary Douglas Alexander, who had interrupted his holiday on the island of Mull to oversee the security arrangements with the then Home Secretary John Reid.

‘What followed at airports was chaos. At Heathrow airport British Airways cancelled scores of flights and other airlines also had to axe services as huge queues built up.

Deputy Commissioner of the Metropolitan Police Paul Stevenson said as many as ten aircraft were targeted under the failed plot (Picture: AFP)

‘In the weeks that followed hand luggage of a certain size was allowed on flights again, but liquids in carry-on bags were limited to 100ml in size – a restriction still in place.’

Travellers were said to be ‘confused’ by how restrictions seemed so changeable depending on where in the world they were flying from or to.

As is the case today, there were different regulations from airline to airline.

In 2006, Metro reported: ’Yet despite the increased aggravation, the public’s desire to fly was undiminished. Nothing – not fear of terrorism, nor long queues, nor the credit crunch – deterred Britons from wishing to jet off to foreign climes.’

how a foiled terrorist plot led to the 100ml liquid

This was the summery for How a foiled terrorist plot led to the 100ml liquid limit at airports We hope that we have succeeded by sharing the full details of this topic.

minute
Strep A deaths in children rise to 15 across UK Sky News
The number of children under 15 who have died from Strep A in the UK has risen to 15, the UK Health Security Agency...

minute
Who is Victor Adeboyejo? Burton Albion striker profiled as Hull City assess transfer options Hull Live
The Nigerian forward has caught the eye of many teams after his goal-scoring exploits for Burton Albion this season...

4 minute
The staggering number of people waiting over 12 hours at your local A&E revealed The Mirror
NHS figures have revealed out of more than 2.1million people to visit A&E last month, around 2% were left waiting...

4 minute
‘And now we kiss on the mouth’ – Louis van Gaal embarrasses Memphis Depay in bizarre response to Di Maria criticism The Sun
LOUIS VAN GAAL’S Holland team are in good form on the pitch at the World Cup – with the man himself on...

4 minute
Mum shares clever trick to make kids think they have more presents without spending extra The Mirror
Vicky Smith has shared her tips for buying Christmas presents on a budget - including the savvy trick she uses to...

B4265 closed near Cardiff Airport after serious crash at St Athan - latest updates Council united in support for just transition funding Unai Emery continues Dubai masterclass as Aston Villa receive Joao Felix update Neighbours spend whooping £100,000 in a legal battle over ‘few feet’ wide parking space Jude Bellingham alternative has already given Liverpool glimpse into future after starring with Anfield duo Live: Wales breaking news plus weather and traffic updates (Thursday, December 8) Almeria is the place to go for sunshine lovers this winter Celine Dion says she has a rare and incurable neurological condition OnlyFans star who went viral with PA ad hires a woman and gets her on racy site What the papers say – December 8 Former US spy to be sentenced for killing teenage motorcyclist outside air base What is ITVX, everything you need to know as new platform launches Enforcement figures on A96 at Bainshole show continued disregard for speed limits Holly Willoughby Falls Down Stairs On Celebrity Juice Politics: Inexplicable non-dom status should be abolished
Uk Press24